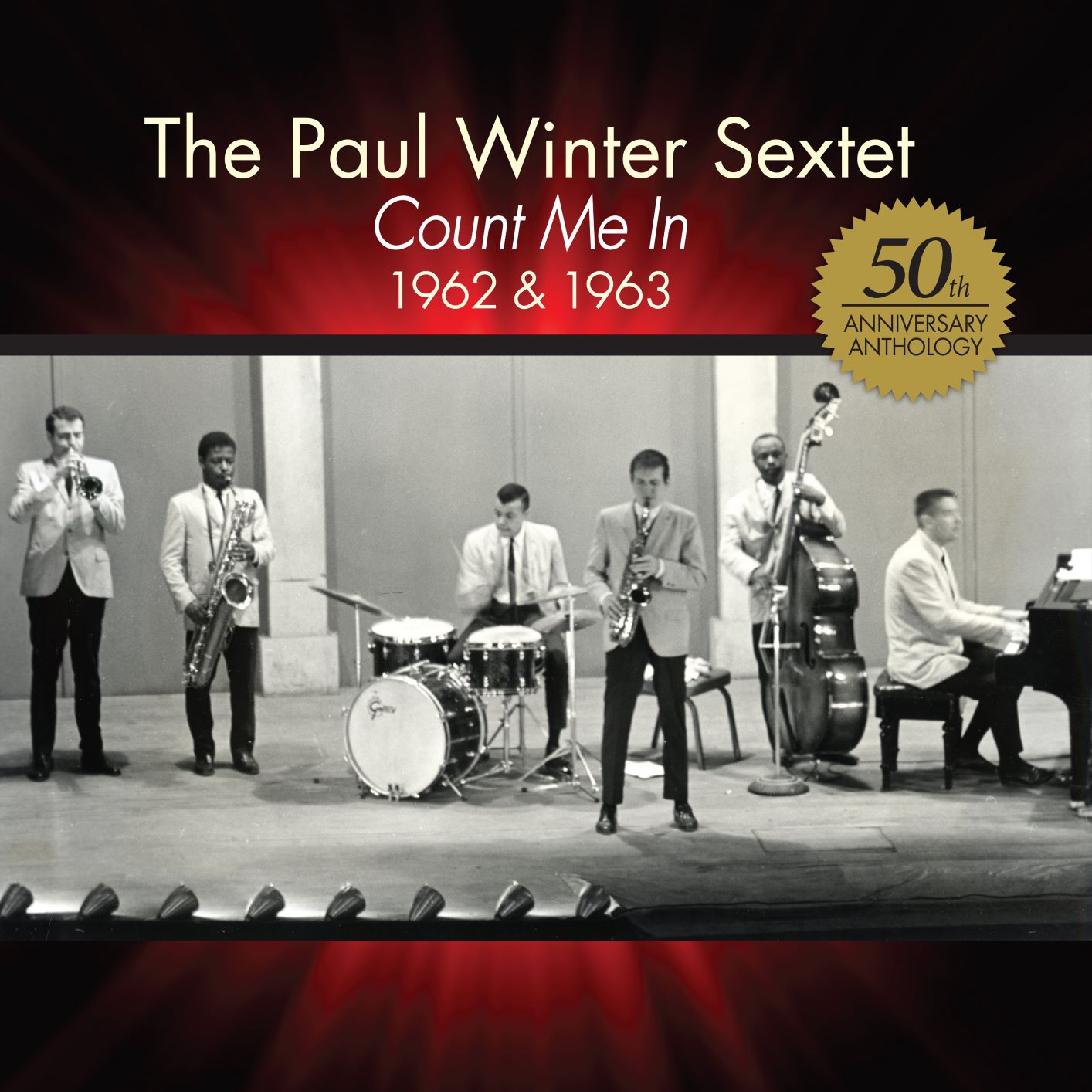 The Paul Winter Sextet emerged in Chicago during Paul’s years at Northwestern University. After winning the 1961 Intercollegiate Jazz Festival, the band was signed to Columbia Records by legendary producer John Hammond. In 1962 the Sextet recorded its first three albums, and, on recommendation from Festival judges Dizzy Gillespie and Hammond, was sent by the State Department on a six-month tour of 23 countries of Latin America.

The success of this tour led to an invitation from First Lady Jacqueline Kennedy to play at the White House. The Sextet’s performance in the East Room on November 19, 1962, happened to be the first-ever jazz concert in the White House. The group continued to tour and record throughout 1963, and made their final album during the week of President Kennedy’s assassination. Then, numbed by that tragedy, and discouraged by what they felt was the end of that optimistic era, the Sextet disbanded and the players went on to other pursuits – the drummer eventually to Count Basie’s band, the bassist to Ahmad Jamal’s trio, the trumpet player to medical school, the baritone saxophonist to teach at Michigan State, and Paul to Brazil, to resume his exploration of the world’s music.

“The Sextet was conceived as a kind of little ‘big band,’ and with our instrumentation of three horns and rhythm, it has quite a different sound from that of the Paul Winter Consort, which people have known me for during the last several decades. But on a primary level, it’s all the same lineage: a spirit of celebration, in the democracy of ensemble, aspiring toward a balance between the improvised and the composed.”

The three-year journey of our Sextet was graced with many blessings. It was an extraordinary time and place in which to be enchanted with jazz. When I came to Chicago in 1957, the south side was a jazz mecca. I recall seeing hand-lettered cardboard signs on telephone poles in the area of 53rd and Cottage Grove: Pot’s On…Jug & String…McKie’s That’s all they needed to say to let the neighborhood know there would be swinging music that night by Gene Ammons and Sonny Stitt at McKie’s Showboat Lounge.

I loved the exuberant and congenial spirit of the black jazz community and immediately felt a resonance. Not once did I feel unwelcome. This was my first experience of any culture outside the predominantly white one I’d known growing up in Altoona.

It was out of this south-side community that our Sextet and its music emerged. We were enthusiastic students of this rich musical tradition, and by the early ‘60s, the Kennedy era seemed to affirm this expansive spirit we felt from the music. In the nation, there was this growing sense of great possibilities that we came to almost take for granted during those all-too-brief Kennedy years.

The new Peace Corps encouraged my long-time interest in cultural exchange. Before we left on our State Department tour in early ’62, I got to meet with Sargent Shriver and propose my idea for a Jazz Corps, which would send jazz musicians all over the world. He was open to exploring it, and asked me to make a survey during our travels in Latin America. I gave him a report when I returned. If I had been more interested in being an administrator than a musician, this project might have gone forward.

When I think about the vast diversity of great and unique musicians who have come forth in all these genres of jazz, as the music has evolved since the late 19th century, I am moved to wonder: what does this say about America? Has there ever been a more fertile garden of musical expression, in any country, throughout history? And what is the promise, still waiting to be fulfilled, of this amazing saga? How lucky we in the Sextet were, to have had these adventures, as part of this welcoming music called jazz, with which America has embraced the world.

“… one of the finest feasts of music released in 2012. Count Me In is a truly historic musical document that is an essential to the collector of great contemporary musical performances.”

“For over two hours, the band wails with guts, spine, integrity, outstanding chops, and humor (those trumpet side commentaries in the otherwise slinky title cut Count Me In are hilarious, something Raymond Scott would’ve whipped up). Those familiar only with Winter’s later work will be shocked to hear how far beyond hip the young reeds giant was, holding nothing back. And the arrangements? Yow! To kill for… So grab this overwhelming document while you can. It’s on Winter’s Living Music label,… and the market is so damn fickle nowadays that God only knows what’ll happen. One small grace will occur, though: Count Me In will definitely be on my FAME Best of 2012 list. It’s that damn good.”