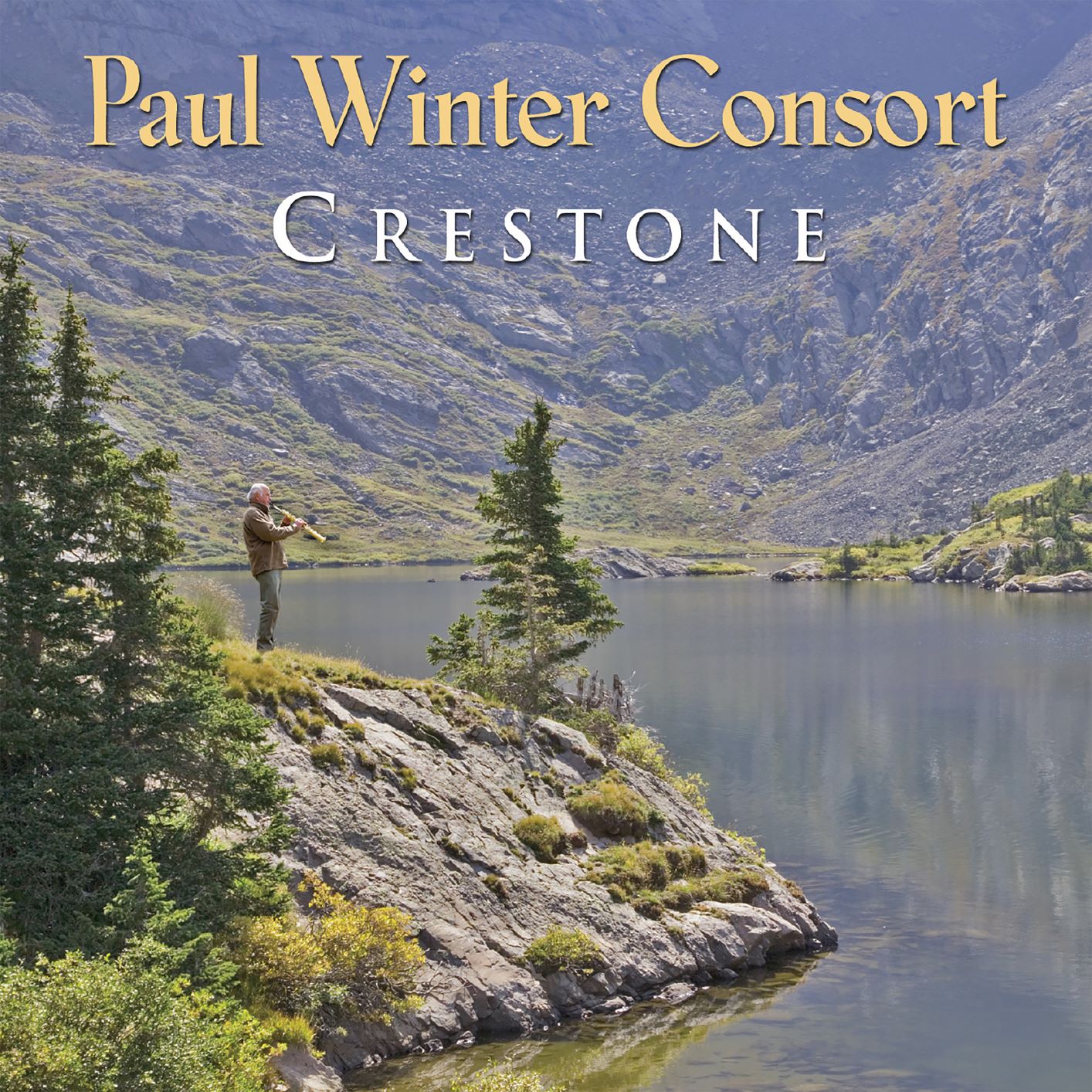 Produced by: Paul Winter and Peter May

The primary recordings for this new release were done in the natural acoustics of North Crestone Lake, at an altitude of 11,800 feet in the Sangre de Cristo Mountains. The album introduces to the world the voice pow-wow drum and cedar flute of John-Carlos Perea, a young singer of Apache heritage, who sings in the Northern Plains Indian tradition. The album also features the voices of Mountain Bluebird, Red-winged Blackbird, Whooping Crane, Meadowlark, Sandhill Cranes, Coyotes, and Buffalo.

“My sense is that this album asks for a special mode of listening. The journey works best for me when I’m lying flat on my back, with my eyes closed, and I participate more in my imagination, the way we listened in the old days of radio. I’ll be grateful to all who listen, and share these adventures, as I am to all who took part in the realization of this music.”

From the liner notes:

“All my relations!” The Ute Medicine Man called out this prayer each time he poured water over the red-hot rocks in the fire pit at the center of the sweat-lodge. When we finally emerged from the lodge into the cool night air, I was stunned by the vast umbrella of bright stars above us. Later that evening, I played some calls toward the mountain on my horn, and a pack of coyotes began to howl.

This was my first visit to Crestone, a tiny town at the foot of the Sangre de Cristo Mountains in southern Colorado. It lies in the northeast corner of the San Luis Valley, the largest alpine valley in the world, larger, in fact, than my entire home-state of Connecticut. For 12,000 years the Valley has been used by people as a hunting ground and migration corridor. Many Indian tribes have regarded this land as very sacred, and in recent times, contemporary seekers have been drawn here.

It was September, 1979, and I was there to take part in the annual conference of the Lindisfarne Fellowship, an association of creative individuals in the arts, sciences, and contemplative practices, devoted to the study and realization of a new planetary culture. Lindisfarne’s founder, poet and cultural philosopher William Irwin Thompson, had come to Crestone to establish a solar village in the Sangre de Cristo Mountains. Among the Lindisfarne Fellows at that first conference in Crestone were poet/farmer Wendell Berry; anthropologist Joan Halifax; astronaut Rusty Schweickart; physicist Amory Lovins; ecologists Nancy Jack Todd and John Todd; Whole Earth Catalogue founder Stewart Brand; poet GarySnyder; biologist Lynn Margulis; Arcosanti builder Paolo Soleri; neuro-scientist Francisco Varela; Esalen founder Michael Murphy; economist Hazel Henderson; environmental educator David Orr; ecologist Dana Jackson; botanist Wes Jackson; architect Sim Van der Ryn; and the Dean of New York’s Cathedral of St. John the Divine, the Very Reverend James Parks Morton. Spending time with these extraordinary people, in the exhilarating atmosphere of Crestone, was deeply inspiring. I don’t recall much of what we discussed during those days together, but I do remember vividly our great volleyball games, a sunset picnic at the Great Sand Dunes, and the sweat-lodge.

Returning to Crestone often over the next fifteen years for these yearly Lindisfarne gatherings, I developed a deep sense of kinship both with this magnificent landscape and with the multi-cultural perspective of the people I met there.

In 2004 I was invited back to Crestone to play a concert for the Shumei International Institute, which had recently been established there. I had met the musicians of the Shumei Taiko Ensemble at the Cathedral of St. John the Divine in New York, and the Consort and I later played with them in an “Earth Celebration” in Pennsylvania for the Rodale Institute, with whom Shumei has had a long-term collaboration in natural agriculture. Looking out once again at the breathtaking panorama of this valley and these mountains, and reflecting on my twenty-five year relationship with Crestone, I felt a calling to make music about this remarkable realm.

As in the recording of my albums about the Grand Canyon and the Northern Rockies, my first quest was to find a resonant acoustic space in the mountains where the land would respond to our music with reverberations and echoes. I was fortunate to find in Crestone an extraordinary guide, Peter May, a natural architect who knows the mountains intimately, and who also happens to play trumpet, as well as being chief of one of Crestone’s fire departments (“Kundalini Fire Management”). Peter and I hiked to several places and played our horns to test the acoustics, but found no magical-sounding spaces. I soon realized that finding my “acoustic Shangri-la” here in the Sangres was going to be more difficult than it had been in canyon country, where there are vertical walls to reflect the sound. Peter volunteered to continue making reconnaissance trips, and over the next year he hiked to fifteen sites, recording his trumpet on a video camera and sending me the cassettes so I could hear the acoustics. One of these places, North Crestone Lake, at 11,800 feet, seemed to have promise. In the fall of 2005, I returned to Crestone and we hiked up there with Steve Van Zandt, our field recording engineer, who had been on several of our Grand Canyon expeditions. I played my saxat various points around the lake. The sound was thrilling, and the setting spectacular. This was the place.

Over the next year, we made plans for the recording expedition, and in early September, 2006, our entourage of musicians, cooks, hostlers, photographers, and crew gathered in Crestone. With fifteen people, several horses and mules, camping gear, food, an inflatable raft, and an array of instruments, including a large Japanese taiko drum, we made the long pilgrimage up to North Crestone Lake. Weset up a tent village, well back from the lake, with a full viewof 13,931-foot Mt. Adams rising up beyond the opposite shore. During the following week we made music in many places on and around the lake, and at all times of day and night. The whole experience, as in my past wilderness recording adventures, was profoundly nourishing: the sounds, the creatures, the camaraderie, the humor, the crisp September air, the water, the cold nights, the moon, and the warm morning sun.

This alpine cirque became our sanctuary, our wisdom spot, and our place of baptism into this immense landscape. Here we could learn again to listen, and from here we could call out to the world.

Other adventures followed the expedition, in various places around the San Luis Valley, including the Great Sand Dunes, the Monte Vista National Wildlife Refuge, and the vast Medano-Zapata Ranch. I imagined sound-paintings of these scenes, with a mandala of voices reflecting the diversity of this life-community. A journey-story began to weave itself together, in which a succession of musical spirit-guides would carry us through the morning, afternoon, and evening of a day in the world of Crestone.

My sense is that this album asks for a special mode of listening. The journey works best for me when I’m lying flat on my back, with my eyes closed, and I participate more in my imagination, the way we listened in the old days of radio. I’ll be grateful to all who listen, and share these adventures, as I am to all who took part in the realization of this music.

Gratitude to all my relations,
Paul Winter