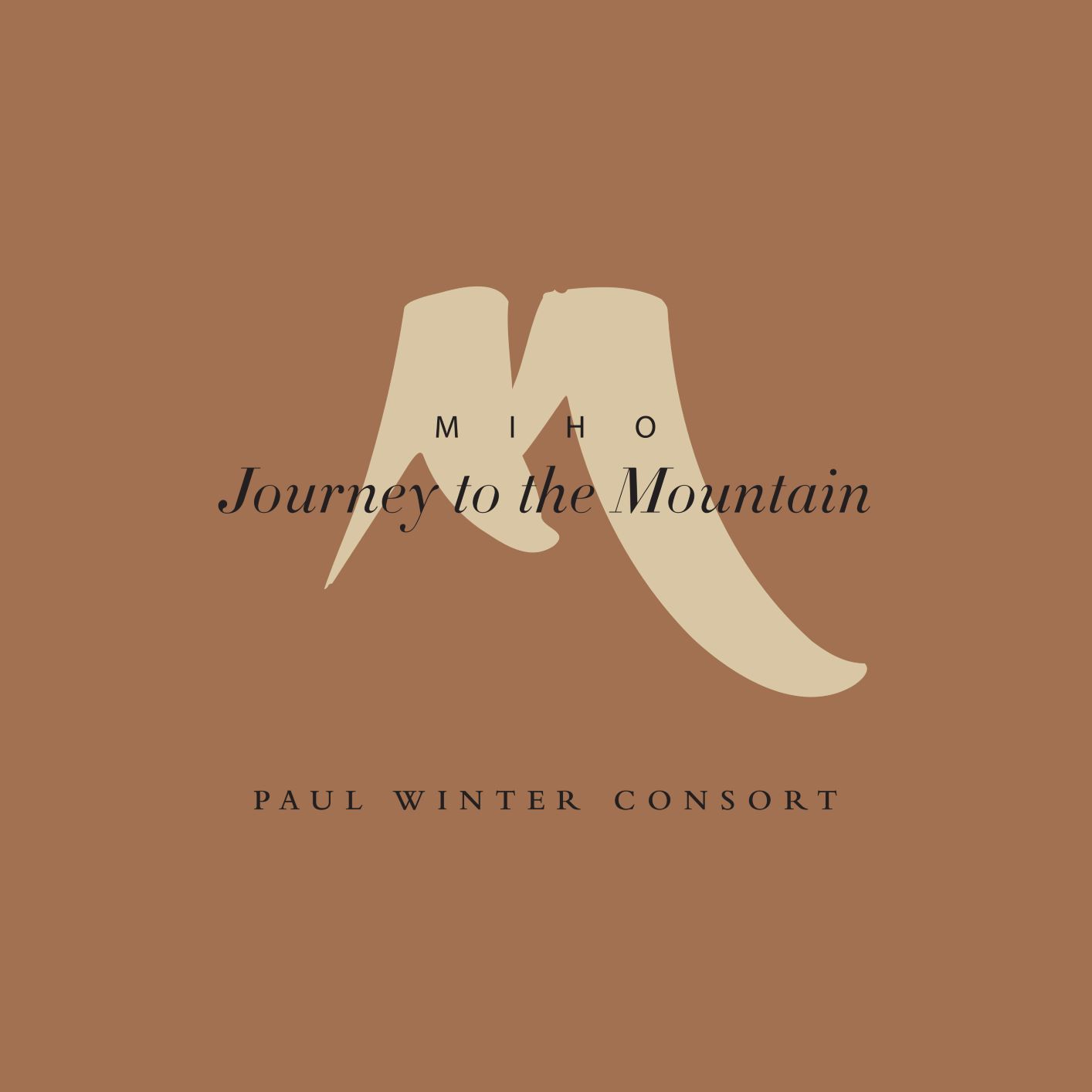 Miho: Journey to the Mountain

Recorded in the Miho Museum, one of Japan’s iconic buildings, designed by I.M. Pei and hidden mostly under the Shigaraki Mountains near Kyoto. Intertwining with taiko drums, bansuri flute, sarangi fiddle and Paul Winter’s clear sax are the birdcalls, waterfalls, and bells of the Miho. All serve to form a shifting, meditative image of paradise found and reflected in the glass and steel of a great architect, in the warp and clay of ancient artisans.

Inspired by the legend of Shangri-La, world-renowned American architect I.M. Pei came out of retirement to design the Miho Museum, reached by a soundproofed tunnel meant to clear the mind and then by a graceful suspension bridge over a stunning gorge. It echoes the journey from a famous tale of a fisherman, following a river farther into the mountains than he ever had before, only to come through a tunnel-like cavern into the ravishing valley of Shangri-La, filled with blooming peach trees.

The Garden of Sonic Delights 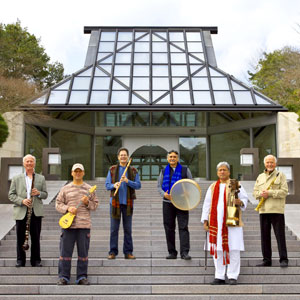 Paradise began as an enclosed garden but morphed into Shangri-la, a valley concealed and shimmering with peach blossoms. Now it echoes in a peaceable kingdom inside a mountain top, filled with resonant chambers and great treasures: the I. M. Pei-designed Miho Museum in the Shigaraki Mountains of Japan. This unique setting has inspired the  Paul Winter Consort’s latest exploration of sound, spirit and space, Miho: Journey to the Mountain. There the Consort conjured the resonant frequencies of paradise with a tapestry of the Earth’s voices:  sarangi and sax, taiko drums and rumbling elephants, Heckelphone and Japanese bush warbler.

Winter first rose to musical prominence in the early 1960s with an award-winning jazz sextet. A sojourn in Brazil, however, taught him that their brash bebop could be complemented by the gentle and soulful esthetic he found in the music there. Soon afterward in 1968, Winter founded the Consort, as a forum for all the voices, music, and sounds he had come to love. The Consort embraced natural sounds as music, and explored many of the planet’s musical cultures before the dawn of “world music.”

To describe his often unclassifiable, genre-crossing work in a more accurate and satisfying way, Winter refers to it as “Earth Music.” The name reflects the source of the Consort’s inspiration and their “aspiration to celebrate the cultures and creatures of the whole Earth,” Winter explains.

As a part of Earth Music, Winter and his ensemble have honed their appreciation of resonance, and for making music in spaces of great reverberation. They have discovered these sonic temples by rafting into the Grand Canyon, playing in the world’s largest cathedral as artists-in-residence at St. John the Divine in New York, or methodically searching for the sweet spots around an alpine lake at 12,000 feet in the mountains of Colorado. The results garnered half a dozen Grammys™. Miho: Journey to the Mountain is another adventure in the lineage of Winter’s landmark albums: Icarus (1972), Common Ground (1978); Canyon (1986); Concert for the Earth (Live at the UN) (1984); EarthBeat (1988); Celtic Solstice (1997); Journey with the Sun (2001); Crestone (2007).

Acoustics, however, were just one part of the Miho Museum’s appeal. Inspired by the legend of Shangri-la, world renowned American architect I.M. Pei came out of retirement to design the mountain museum, reached by a soundproofed tunnel (meant to quiet the mind) that leads on to a graceful suspension bridge over a stunning gorge. It echoes the journey in an ancient legend of a Chinese fisherman, who follows a river farther into the mountains than he ever had before, only to come through a tunnel-like cavern into the ravishing valley of Shangri-la, filled with blooming peach trees.

The building itself—85% of which had to be built below ground due to the site’s status as a natural preserve—draws on the traditional form of the Japanese farmhouse, yet employs Pei’s signature glass roof and love of modern materials. To abide by the preserve’s regulations, Pei retained the original contour of the mountain that the Museum builders effectively moved and replaced to create the space.

Pei’s approach to designing the Museum had a musical side. The architect employs one simple shape, the triangle, repeated to yield complexity, inspired by the way J.S. Bach takes a simple theme and transforms it via complex variations. Winter honored this by featuring a three-note theme at various times throughout the album, including in a solo by the carillon in Pei’s great 193-foot bell tower, the only one of its kind in Japan.

Winter was asked by Shumei, a Japanese organization dedicated to beauty in the arts, natural agriculture, and spiritual healing, to create a musical celebration of the Museum. The celebration marked the 100th birthday of Mihoko Koyama, the woman who was their leader and whose name graces the Museum. He first explored the Museum’s spaces, improvising on his sax, communing with the antiquities and the unique acoustics. “By this time, I was completely smitten with the building, the landscape, the whole place,” remembers Winter. “It’s an extraordinary marriage of architecture and nature. I gradually came to appreciate the antiquities and resonate with the story they seem to tell.”

The artifacts from across Asia suggested both the instruments and voices Winter longed to hear, as well as the images and feelings that the pieces evoke. He began working with long-time collaborators like bansuri (Indian bamboo flute) player Steve Gorn, Armenian instrumentalist and soulful vocalist Arto Tunçboyacıyan, multifaceted percussionist Glen Velez, and double-reed master Paul McCandless. Winter also invited new musical acquaintances, like ethereal Tibetan singer Yangjin Lamu and a renowned player of the sarangi, Dhruba Ghosh, whose classical Indian bowed instrument has dozens of strings that are notoriously difficult to tune and play.

“From spending time among the antiquities, I gradually got the idea that paradise was a central theme. People for millennia have wondered about eternity, the afterlife, and have dealt with the reality of death and the hope that there might be something beyond. The stories or visions of wonderful heaven occur across human tradition.”

The Consort’s work subtly reflects the cultural breadth of the Museum and its emphasis on the journey of culture from Asia’s heart to its Pacific edge in Japan. A primary aspect of this Eastward cultural migration was the notion of paradise (the word “paradise” itself stems from an Old Persian root meaning ”walled garden”). Wherever paradise took root as an idea, it bore beautiful fruit: carpets, paintings, vases, even simple tea bowls.

The first part of the journey, “Many Paths to Paradise,” gives solo or near-solo voice to the varied players and musicians, often connecting them with the Museum’s treasures. Thus, Velez’s resounding frame drum takes up the pulse from the Miho’s giant Sanguszko Carpet, depicting frolicking musicians in rich Persian colors.

The second half of the album, “Shangri-la,” tells interwoven tales of the legendary hidden valley and the Museum itself. In shaping these tales, Winter was particularly taken by the wistful portrayal of two great beasts on a screen by the 18th-century Japanese master Jakuchu, who shows an elephant trumpeting at a half-submerged spouting whale. The screen became the Jakuchu Suite and sparked performances both playful and contemplative, while fostering the kind of joyful transcultural (and trans-species) dialogue Winter delights in.

“Elephant Dance” emerged as Velez taught polyrhythms to the local taiko drumming ensemble, and the deep boom of the lowest and largest taiko drum meshes beautifully with the rumbling voices of Asian elephants. “Whale Raga” flowed from the discovery that Ghosh’s sarangi was in the same key as a recording Winter had of whale songs. Ghosh so enjoyed his duet with the whales, he asked to use their recordings as part of future concerts in India.

Interweaving with the Consort’s discoveries and Winter’s clear sax are the birdcalls, waterfall, and bells of the Miho’s realm. All serve to form a meditative and dynamic image of paradise found and reflected in the glass and steel of a great architect, in the warp and clay of ancient artisans. “These are the happy results that emerge when you have a creative crucible: inspired players in a heavenly realm,” Winter smiles.