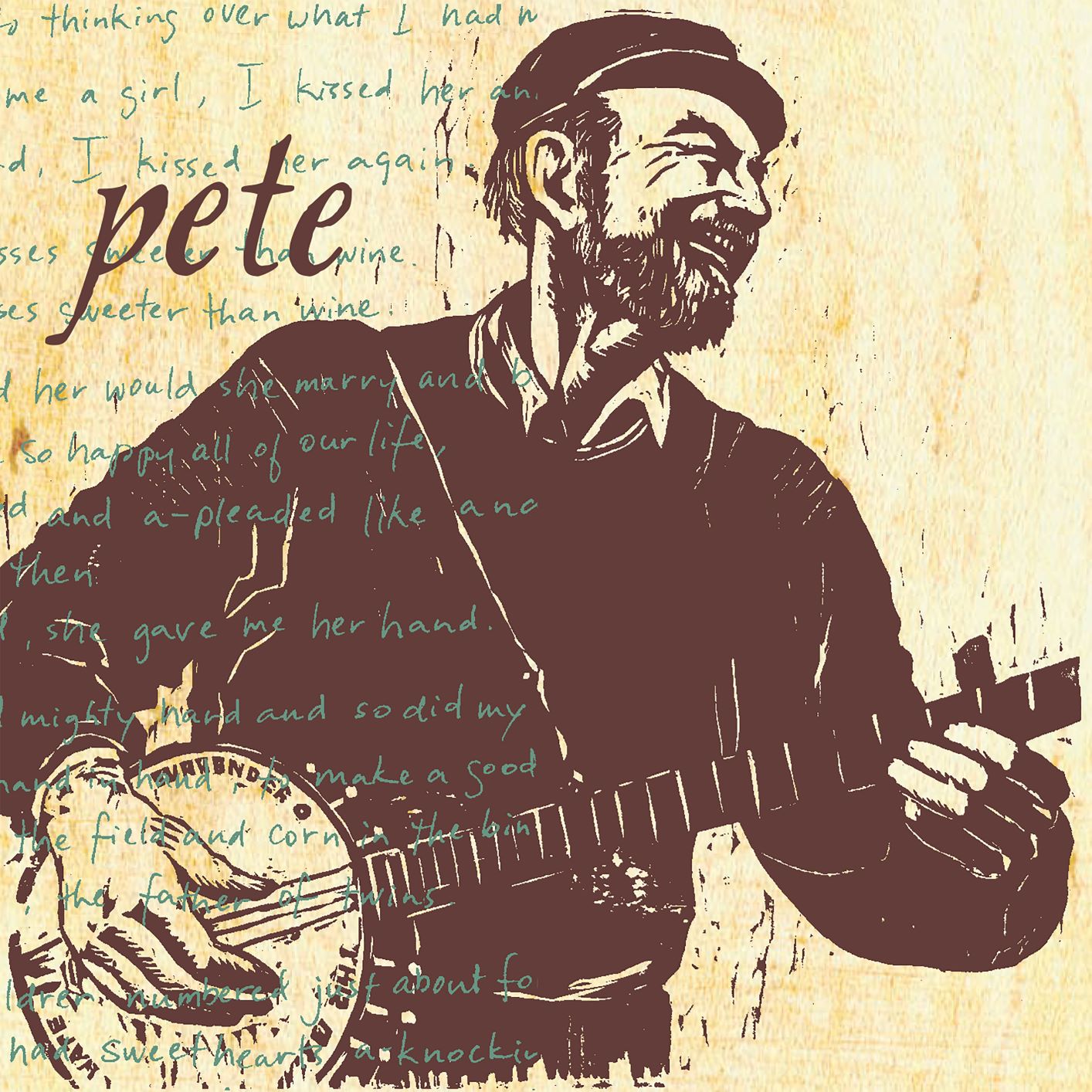 Grammy-winning PETE is an album by American legend Pete Seeger, accompanied by a host of friends, and produced by Paul Winter. Originally released in 1997, the album has been re-mastered. It is available as part of a “Pete-Pak” CD/DVD set, featuring three previously unreleased videos of Pete Seeger in performance.

Playing masterful banjo and 12-string guitar, Pete sings with gusto and soul on the album’s 18 tracks, which include many of his timeless classics such as:

PETE also contains the traditional ballads “How Can I Keep from Singing” and “The Water is Wide”; Leroy Carr’s great blues number “In the Evening”; the activist rap song “Garbage”; and three songs recorded here for the first time: “Huddie Ledbetter Was a Helluva Man,” “Natural History (Spider’s Web)”, and Don West’s anthem on Beethoven’s “Ode to Joy.”

“Like Bach, Pete is the summing-up of an entire era. He is a treasury of American music; and more than anyone I know, Pete gives voice to the soul of this country.”

True to the spirit of his life-long dedication to community participation, Pete Seeger says of his album PETE: “What I want to do with this album is give people something that encourages the creative process and gets people out of the boxes they’ve been put in.”

In the album’s liner notes, Pete touches on the reason that he keeps making music: “The artist in ancient times inspired, entertained, educated his fellow citizens. Modern artists have an additional responsibility – to encourage others to be artists. Why? Because technology is going to destroy the human soul unless we realize that each of us must in some way be a creator as well as a spectator or consumer … Make your own music, write your own books, if you would keep your soul.”

PETE was produced by Paul Winter and Tom Bates.

In 1982, we invited Pete Seeger to be part of our Living Music Festival, at Mohawk Mountain Ski Area, in Cornwall, Connecticut. Driving Pete home to Beacon, New York after the event, I asked him if he’d ever thought of doing an album of his songs that celebrate the Earth, and he said: “Oh, I’ve done about 80 albums, and I think that’s enough.” In the spring of 1987, Pete called to say he was coming to Litchfield to visit his old school, which is just down the road from our farm. Then called Springhill Academy (now the Forman School), Pete had spent several years there from the time he was seven. He said he’s heard about our barn and would love to see it. Pete walked into the loft of the barn and said, “Wow, this would be a great place to get some people together to do some singing.” And I said: ” Right! And maybe some recording, too?” To which Pete said, “Well, ok. But my voice is shot. The only way you could record me is to mix my voice in with a chorus.”

Over the next seven years we did three rounds of sessions with various choruses , till we got recordings that we all felt great about. When we finished the album in 1995, it was the first studio album he had done in 17 years. Entitled simply PETE, the album was honored with a Grammy Award, his first, for Best Folk Album. It has come to be regarded by many as Pete’s last great album. Playing masterful banjo and 12-string guitar, Pete sings with gusto and soul on the 18 tracks of the album, which include many of his timeless classics like “Well May the World Go,” “My Rainbow Race,” “The Water is Wide,” “Kisses Sweeter Than Wine,” “Old Devil Time,” “River of My People,” “How Can I Keep From Singing”; as well as Leroy Carr’s great blues “In the Evening”; and three songs recorded here for the first time, “Huddie Ledbetter Was a Helluva Man,” “Natural History (The Spider Song),” and Don West’s lyrics to Beethoven’s “Ode to Joy.” Three choruses join Pete in these recordings: the 30 voices of Gaudeamus, a Connecticut chorus founded and conducted by Paul Halley; the gospel voices of the Union Baptist Church of New Jersey; and the Cathedral Singers, of New York City. Accompanying musicians include Howard Levy – harmonica; Paul Prestopino – banjo, mandolin, and 6-string guitar; Joanie Madden – tinwhistle; David Finck – bass; Gordon Gottlieb – percussion; and myself on soprano sax.

I think of this album as a ‘Pete Seeger Primer,’ for the younger generations who are not yet familiar with his music; and as a “Grand Reunion with Pete,” for the countless number of folks who grew up on Pete Seeger and hadn’t heard from him in years. I wanted for a long time to produce this album, simply because I love Pete’s music; and by the term ‘music’ I mean to include his singing, his songs, his stories, his great instrumental playing, his passion, his humor, and his kindness. Like Bach, Pete is the summing-up of an entire era. He is a treasury of American music; and more than anyone I know, Pete gives voice to the soul of this country.

“Pete Seeger came out to Minnesota to do a concert back in 1962; I was 20 years old, so was everybody else…When he got us going into ‘Deep in my heart, I do believe, that we shall overcome some day,’ the music just swallowed us up like the whale swallowed Jonah; which does not happen often in the Midwest. Pete Seeger did this for thousands and thousands of people, night after night, year after year. And he made you love your country and love the spirit of the people of this country, and the goodness that was in them. It’s a great country that lets a shy man be as passionate as Pete Seeger is. He was a man who gave himself passionately, to these songs, to these people, and to that beautiful moment, when we put everything else aside, and we sing songs together.”

The 30 voices of Gaudeamus, a Connecticut chorus founded and conducted by Paul Halley